Ladies Should Always Be careful At Parties. See Where These Two Ladies Ended Up After A Party | Naijajoy 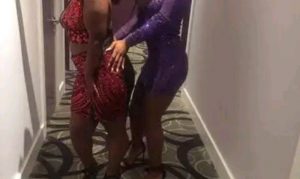 One thing about Alcohol and other substances (marijuana, and Tobacco, etc) which alters a person’s mood is How fast The React after being taken. These substances act as Inhibitors which lowers a person’s inhibitions immediately after consumption. Inhibitions are personal feeling of Fear or embarrassment an individual feels, these fear of embarrassment gives a person a certain amount of self-control which stops a person from being reckless, stupid or doing the weird things he/she thinks of. Alcohol and Other mood-altering Drugs such as Marijuana and Cocaine are substances which lower the inhibitions of a person, thereby making them act without Cautions.

However, here are two girls who got their inhibitions Extremely Lowered while Partying. the ladies in the Photos below Went for a Party, got carried away, and Ended Up waking up in the Toilet, without knowing how they both got there. The awful part is that the person who found them in the Toilet decided to Take pictures of them and share on social media before offering them help.

Let’s take a look at the photos below

Before they left for the party