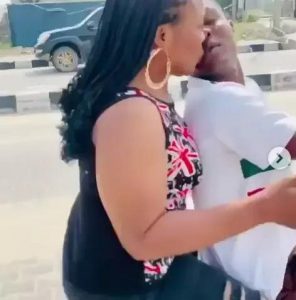 It is actually true that ‘Wonders Shall Never End’. It was a video of what a Lady did to her Bike Man that made me to use that expression. So many awkward things happen in this country every day. In fact, it is at the point when you think you have seen it all that you will see another strange, awkward and bizarre phenomenon, especially in this country. I do not know if this was scripted or not but it looks so real and many people have been blasting the lady for being shameless. If it was done by a man, it would not be so much condemned but, how can a woman kiss the head of a strange man on the bike? Who does that? Well, read patiently to get the full gist of how it started.

A Young lady was on the bike and suddenly, she started kissing the bike man on his head. At first, the bike man thought it was not premeditated and it could be a mistake. So, he kept on moving. For the second time, this lady kissed the bike man on his head again. By this time, he realized something was wrong. It was not as if they are in a relationship or they even know each other before! He was just a regular bike man. The shameful part is the when that this lady kissed the head of this man which could contain so many germs but she was smiling. Who knows the kind of head it is? There may be germs and all sorts in the head like that but, she was indiscriminate about that. After she kissed him for the second time, the bike man did something funny .
The moment the Bike Man tried kissing her back

The Bike Man was enjoying it already and he was already getting a wrong signal. Poor Man thought the lady would love to kiss him. So, the moment he looked back, he targets the lips of this lady and tried to kiss her lips to lips. The lady got annoyed as she attempted to slap the bike man. This made the bike man to stop the bike to resolve the issue. The man was pissed off because he has been receiving kisses on his head but when he tries to kiss her back, she wanted to slap her. Many people blast this young lady because she was the one who started rubbish. What if the Man has ‘lapalapa’ or other germs on his bead?