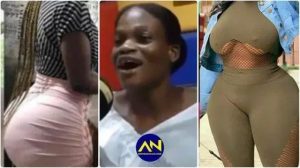 Speaking in an interview with Bongo Depharaa on Okay FM’s Ekwansodwoodwoo, miss Sandra disclosed that she has sl£pt with over 5000 men with at least 30 being young men.

Narrating her story, Sandra disclosed that she started sl33ping with young boys in a cemetery at the age of eight when her mother had passed away.

According to Sandra, her journey to Accra was the beginning of her “Slay Queen” days because she used to work in a club that had rich men and these rich men used to sl33p with her in exchange of money.

She also revealed that most slay Queens out there have secret weapons they use in charming rich men into sleeping with them.

” I have a group of ladies I used to work with and sometimes we will go for powers under the sea where we will be given snakes to put in our pr¡vate parts so that any man we slept with will do whatever we wanted”. she said.

“Some of the black magic we go for come in the form of waist beads, anklets, rings, make-up and even lipstick. Sometimes we go as far as use certain types of waist beads to prevent these men from £jaculating especially when we dislike them”. She added.

Miss Sandra went ahead to add the 5000 men she slept with included MPs, Musicians, drug lords, fraud boys and others.

She advised young ladies to be more prayerful and careful of the kind of men they dated.

She also advised men to learn to stick to their wives because there is nothing special about the other women they sleep with.