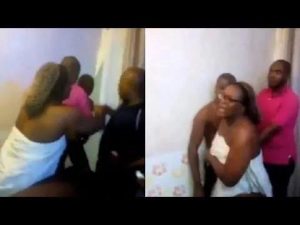 A married woman has been caught sleeping with another man in her matrimonial home.

In a video circulated on social media, the woman was seen tying a white wrapper to cover her nakedness as she pleaded for the release of her lover as eyewitnesses were ready to pounce on him.

The woman was heard saying her lover doesn’t know anything about anything as he received a heavy slap from another man in the room.

Watch The Video Below: