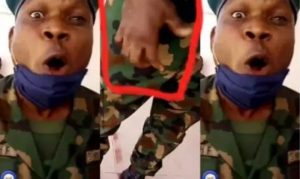 Soldiers are known to be well-disciplined although they don’t have many public relations they are known to be professional in dealing with civilians, and this is one of the reasons why they are respected a lot

Although a soldier may seem friendly with you as a civilian, trust me you don’t want to get on their bad side. A Lady who got on the bad side of a soldier on an ATM queue and she will not forget in a hurry what he did to her in public and she has cried out about it on social media and lucky enough she caught everything on Camera

The video which has now gone viral shows the soldier man obviously angry at the lady for what she had said to him in front of the ATM and so he deeps his wallet into his pocket, reached for his waist, and pulled out his belt