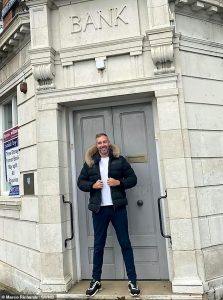 A man who was very poor and applied for a loan at a bank but was turned down because he was too young has finally bought the bank after becoming a millionaire.

The businessman identified as Adam Deering, 39, was ‘penniless’ when refused a £10,000 sum by the sceptical manager of his local RBS branch in Urmston, Greater Manchester, in 2002.

But toiling from the floor of a small office – he could not afford a desk and chairs – the determined entrepreneur grew his debt management company from scratch and in 2014 sold it for £5million.

Now heading up five multi-million companies, he has made the ultimate statement by purchasing the bank’s building for £450,000.

Recalling feeling crushed after being denied the loan, Mr Deering said: ‘I quit my job as a salesman aged 21 because I knew I had it in me to create a successful business, but I didn’t have a penny to my name so I needed a bank loan.

‘I presented them with a comprehensive business plan and asked for £10,000 but the bank manager didn’t seem to take me seriously at all.
‘I’d put my heart and soul into the business plan and I remember having my fingers crossed under the table as I nervously waited for the manager to go through it.

‘I was devastated when she told me I was too young and inexperienced and there was no way they could take a risk on me.

‘Without the money I spent four months cold calling people from the floor of a small office because I couldn’t even afford a desk and a chair.
‘Those early months were so difficult, not knowing if I was going to be able to make it work and not knowing if I’d be able to pay my bills.

‘There were lots of times where I thought it was the end, but I refused to give up and it paid off.’

Mr Deering spent the last scrapings of his sales salary on renting a small office in Stretford.

His hard work and determination paid off and he watched the business flourish over the next decade, before cashing in six years ago.

Drawing on his own experiences, Mr Deering inspires others as a motivational speaker. He was an unruly teenager, and aged 14 he was expelled from his all-boys school for vandalising a car.

He enlisted in the RAF, but soon started drinking too much and dropped out – finding himself back in Urmston and in a constant cycle of getting fired from jobs.

He was finally put on the straight and narrow by a Good Samaritan neighbour, Chris, who helped flesh out his CV and motivated him to apply for jobs.

Mr Deering secured a role in a debt management company, before quitting to launch his own venture.

Mr Deering also tries to inspire others as a motivational speaker, as well as holding a property portfolio worth millions of pounds.

He will now oversee a £500,000 renovation of the former bank to convert it into eight apartments and a retail unit.

The businessman said: ‘Building a business from scratch certainly isn’t easy and there are always times when you wonder if it is going to work out.

‘The key is to stay true to your vision and keep going, there will always be hurdles to overcome.

‘When I was turned down for the loan, it was tough but because I had a dream and I was so focussed on achieving it, I made it happen anyway.

Mr Deering said: ‘To me, buying the bank building brings things back full circle and it shows that I was right to keep believing in myself.’