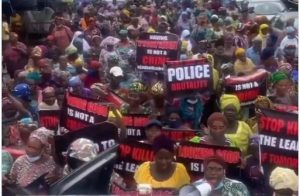 The #EndSARS protest calling for the scrapping of the Federal Special Anti-Robbery Squad (SARS) is spreading across the country like a wildfire.

Saturday saw a remarkable amount of protest in different cities across the country. In some cities, the demonstrations led to clashes between the protesters and Police officers.

The protest in Ogbomosho led to the killing of one young Nigerian, Jimoh Isiaq and several others sustained injuries.

In Abuja, the protesters were teargassed as they made an approach for the Nigeria Police Force Headquarters demanding to see the Inspector-General of Police, Mohammed Adamu.

The youths are tired. Unilag is tired

#EndSARS protest ongoing in Ikorodu, please come out guys RT FOR OTHERS. pic.twitter.com/paxM3p09ub

In Kaduna, protesters took to the side of the road where President Muhammadu Buhari went through on his way to witness the passing out parade of new cadets of the Nigerian Defence Academy to display placards demanding an end to SARS.

They tried to stop us but it never worked!!!!!! Thank you Kaduna!!!!! #EndSARS #EndSarsNow