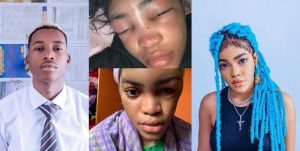 Sanni Goriola aka Lil Frosh, an upcoming rapper recently fired from DMW has been arrested and detained by the police for allegedly beating his girlfriend to a pulp.

Nigerians called him out for it and demanded justice for Gift.

Shortly afterwards, Davido released a statement saying the singer has been fired from his record label — DMW.

The new development about the case is that he has been arrested and detained in a cold cell at Alagbo Police station Ikoyi.