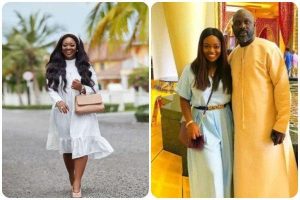 Recall that an Instagram blogger had claimed the actress had gained weight because she’s carrying Weah’s child.

However, at the naming ceremony of the son of her colleague Victoria Labene during the weekend, Jackie Appiah denied the allegation.

The 36-year-old had a little more to say on the allegation in an Instagram post on Monday.

“The laughter that dispels lies and fabricated stories,” she captioned a photo.