Why I don’t feel comfortable around people – Rema | Naijajoy 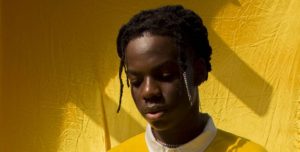 The mavin’s record singer, Divine Ikubor is popularly known as Rema has taken to social media to express his thought around people. Rema is known to be a fellow who has distanced himself from negatives all this while.

His recent outburst is coming after he performed in the Grand Finale of the Biggest reality TV show in Nigeria, Big Brother Naija , he performed alongside, Davido, Mayorkun , Fireboy in the grandfinale.

Rema in the early hours of Monday took to Twitter to vent out his anger towards some selected sect of people who seems to feel entitled on his career, in one of his rants he said

NIGGAS FEEL I’M DISRESPECTFUL, THEY WANT ME TO ALERT THEM BEFORE I DROP.

the superstar Rema discloses reasons why he feels uncomfortable around people, he opined that people only love him due to what he has to offer, he made his uncle as an analogy, he recalled only two of his friends were with him while he was on the sick bed before eventually passing out. in his words, he said;

WHEN MY LATE BROTHER DID HOUSE PARTIES Y’ALL CAME, WHEN HE DIED ONLY 2 FRIENDS STOOD BESIDE HIS DEATH BED. THAT’S WHY I’M NOT COMFORTABLE AROUND PEOPLE, THEY LOVE ME BECAUSE I HAVE SOMETHING TO OFFER, YOU KNOW YOURSELVES DON’T LET ME CATCH YOU!!!

Furthermore, Rema also reveals the challenges he faced before he got the fame, he revealed, how he stole his friend laptop, he apologizes for the criminal act, in his words he said

ERIC, SORRY I STOLE YOUR LAPTOP IN 2017, I KNOW YOU WERE TRYING TO HELP ME. MY MOM HAD A CHILD ON THE WAY, I WAS THE ONLY MAN IN MY FAMILY. THEY MADE FUN OF HER BECAUSE SHE GOT PREGNANT, I WANTED TO PROVE THEM WRONG BRO, I HAD TO DO IT.