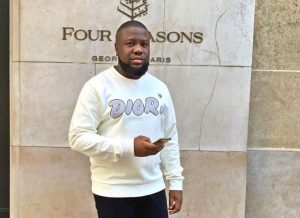 Fresh evidence from the Federal Bureau of Investigations (FBI) has revealed how Ramon Abbas, popularly called Hushpuppi, a Nigerian Instagram sensation, was involved in laundering unemployment benefits meant for citizens of the United States.

The scheme is one of the insurance programmes provided for workers who become unemployed through no fault of their own and meet certain other eligibility requirements. The joint state-federal programme provides cash benefits to these workers.

Hushpuppi, who was arrested in UAE over money laundering and cyber fraud allegations, is currently facing charges in the U.S.

He is accused of facilitating computer intrusion, Business Email Compromise (BEC) fraud and money laundering and has been arraigned in an American court in California. His trial begins on October 13.

He pleaded not guilty to the four counts of conspiracy to commit wire fraud, money laundering conspiracies, international money laundering and engaging in monetary transactions in property derived from specified unlawful activity.

Nevertheless, in the affidavit filed on September 14, with the United States District Court, Central District of California, Andrew John Innocenti, an FBI agent trained on foiling cybercrime indicted Mr Abbas in the outcome of his investigation.

Mr Innocenti said he discovered that Hushpuppi, using his email address, registered on a website whizzlog.com (“Whizzlog”) which is a marketplace for buying US Bank Logs and money laundering.

He said although, based on his training, sophisticated cybercriminals do not use their personal email address in registering on such websites but Hushpuppi did.