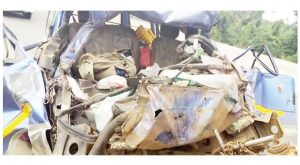 The spokesperson for the Traffic Compliance and Enforcement Corps in the state, Mr Babatunde Akinbiyi, confirmed the accident.

Akinbiyi explained that the crash occurred around 1.30pm and was caused by reckless driving and loss of control on the part of the bus driver.

According to him, five male adults were involved in the crash, with two in the truck and the others in the bus.

“One of the passengers in the bus died on the spot, while the driver and the other passenger are recuperating in hospital,” he stated.

Akinbiyi explained that the injured victims were taken to the Olabisi Onabanjo University Teaching Hospital, Sagamu, while the remains of the deceased were deposited in the mortuary of the hospital.

He advised motorists to have 100 per cent concentration behind the wheels and avoid reckless driving.