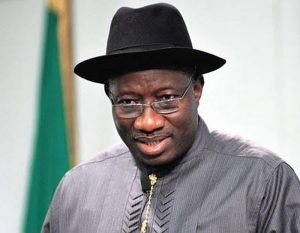 Any Society Where Thugs Become Role Models Will Fail – Jonathan

Any Society Where Thugs Become Role Models Will Fail – JonathanFormer President, Goodluck Jonathan has expressed that a society that makes thugs role models is bound to failure.

The former president and United Nations Special Envoy made this remark writing as a guest columnist on THISDAY on Friday.

Jonathan expressed his sadness that in some places, miscreants are celebrated for the roles they play during elections.

The former President reiterated that only electronic voting can rid African societies of electoral malpractices and violence.

“I am also convinced that electronic voting will eliminate the worrisome issue of massive rigging and violence during elections because it will limit human presence during voting,” he said.

He went further to state that periodic election is not only the way to ensure democracy, saying there is “need for work on how to strengthen the pillars of democracy where they are weak, and enhance political stability across the continent.