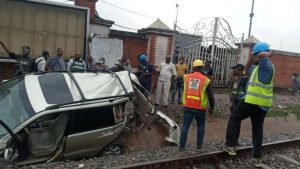 One Killed, Others Injured As Vehicles Collide With Train At Oshodi

One Killed, Others Injured As Vehicles Collide With Train At OshodiTragedy struck in the early hours on Monday in Lagos when a bus with registration number GGE 972 GE and a Highlander Sport Utility Vehicle, SUV, collided with a fast-moving commuter train while crossing the rail at PWD inward Oshodi, Lagos, killing an unidentified man and several injured in the process.

According to an eyewitness, the incident which occurred at about 8 am, happened when the vehicles suddenly veered off onto the train tracks at PWD inward Oshodi.

It was gathered that the bus and the SUV were dragged along the rail track for a long stretch of the journey before the train managed to come to a complete halt.

While six passengers in the commercial bus narrowly escaped death, one of the two occupants in the SUV died and the other sustained a severe injury and was immediately rushed to the hospital for treatment.

Director-General of Lagos State Emergency Management Agency Dr. Femi Oke-Osantintolu, who confirmed the incident said the situation which happened around 8.am, was later brought under control According to Oke-Osanyintolu, “The agency received distress calls at about 8.15 am, on the above incident.

Upon arrival at the scene, it was discovered that a passenger bus with registration number GGE 972 GE, had veered onto the train tracks while crossing the rail at PWD inward Oshodi, Lagos.

“The bus was then dragged along for a stretch of the journey before the train managed to come to a complete halt. “Subsequently, the agency was able to successfully extricate the trapped passengers.

“At 1000hrs, additional investigations revealed that a third vehicle, a Highlander SUV, was also involved in the collision and its passengers (2 adult males) sustained serious injuries before being transported to the Lagos State University Teaching Hospital., LASUTH.

“One has since lost his life and been deposited at the morgue while the other is still undergoing treatment.” He said other injured victims including a young man, 20 after first aid attention were also rushed to the hospital for further treatment.

Oke-Osanyintolu, therefore, urged members of the public, especially commercial drivers to always exercise caution and obey traffic regulations to prevent unnecessary accidents The wreckage of the bus had been safely removed to allow for the free flow of traffic.