With Burna Boy’s New Level – Can We Say He Has Passed Davido & Wizkid? | Naijajoy 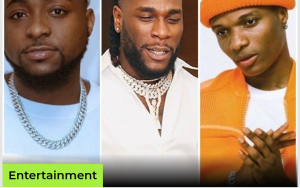 With Burna Boy’s New Level – Can We Say He Has Passed Davido & Wizkid?

With Burna Boy’s New Level – Can We Say He Has Passed Davido & Wizkid?It is crystal clear that Burna Boy is on a whole new level as an artiste.

With the release of his new album titled “Twice As Tall” and the Grammy nomination he scored with the “Äfrican Giant” album last year, it is not contestable that Burna Boy of now is not the same Burna Boy of 2 to 3 years ago.

A flashback to few years ago, Davido and Wizkid were clearly ahead of him but now things seem to be changing for Burna Boy real fast and some music pundits are already rating him higher than his peers in the music industry.

Guys, we would love to hear from you