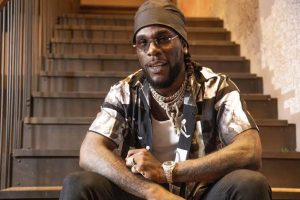 The Nigerian Afrobeat singer and songwriter, Damini Ebunoluwa Ogulu popularly known as Burna Boy has taken up a gun shooting class in a bid to protect himself from threat or for the fun of it.

It will be recalled, the 2 time BET award winner promised of

big coming, he announced is new album which Set to be released soon. Looking at the video, we must admit, the Africa Giant is really skillful and could pass for a military officer, with respect to his gun-wielding and target.

In the video, he could be seen loading the gun (AK47) and shooting at a long-range. I bet he hit the target from the 8 rounds of bullet he fired.