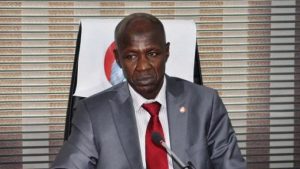 President Muhammadu Buhari has suspended the acting chairman of the Economic and Financial Crimes Commission (EFCC)(EFCC), Ibrahim Magu, multiple sources have disclosed. Mr Magu allegedly spent last night in police cell at the Force Criminal Investigation Department Headquarters in Area 10, Garki, Abuja, after he was quizzed on Monday for about six hours by a Presidential panel, chaired by a former President of the Court of Appeal, Justice Ayo Salami.
It was gathered that Magu was detained at the FCID after the panel grilled him. The media aide of the anti-graft boss, Tony Amokedo, told the Daily Trust that he is not aware of the suspension of his boss. The panel was constituted by President Muhammadu Buhari to probe various allegations levelled against Magu following a petition by the Minister of Justice and Attorney General of the Federation, Abubakar Malami, and the Department of State Service (DSS). Malami’s memo allegedly accused Magu of diversion of recovered loot.

The memo was said to contain 22 allegations against the embattled EFCC chairman. But Malami through his spokesman, Dr Umar Gwandu, said he had no knowledge of Magu’s arrest. “You are just informing me now,” Gwandu said when told that Malami had reportedly written a memo in June, 2020, which indicted Magu. “I am also not aware of any memo written to the president on the EFCC chairman,” he said.

How Magu was interrogated

One of our sources said the Salami panel had “quizzed Magu” who has been the acting chairman of the EFCC since when he was first nominated for the job by President Buhari in 2015. “I am sure Justice Salami was selected to chair the panel because he will not compromise. “This is a serious setback for the administration’s anti-corruption war. “As it is now, Magu is a loner. “He may be asked to handover to the most senior officer in the commission while the investigation continued. “I don’t see him surviving this,” the source told one of our correspondents. Another source told the Brtshadow.com that “it took a long time before President Buhari gave the green light for Magu to be interrogated.” According to the source, “What happened yesterday was a tough decision…It was at the instance of the president and he (Buhari) agreed that Magu should be asked questions. “This was based on the petitions and facts made available to him. “Magu is the face of the anti-corruption war of the president but the allegations are heavy. “So, I can assure you that it was a tough decision taken by the president in order to save his image and that of his administration,” he said. It was not clear last night whether Magu was allowed to go home after he faced the panel or the DSS took him into custody.

Why Magu was invited – Presidency

The Presidency yesterday said Magu was not arrested but rather invited so that he can respond to issues as they arise. Senior Special Assistant to the president on Media and Publicity, Garba Shehu, in a text message in response to Daily Trust enquiries, said Magu’s attention was “immediately” needed as the presidential panel investigating the disposal of recovered assets began its sitting. Garba, while reacting to a text message that sought to know the feeling of the presidency to the DSS’s decision to invite Magu, said: “There is a presidential panel that has begun sitting, investigating the disposal of recovered assets and the EFCC chairman is responding to their questions. “I will not call it arrest per se, as many have suggested, but they need him to be immediately available to them so that he can respond to issues as they arise,” he said. Magu could not be reached for comments last night as his mobile phone was switched off. But his media aide, Tony Amokedo, told the Daily Trust that Magu was not arrested as reported by a section of the media. He said the EFCC boss was invited by a presidential panel investigating allegations of corruption against him and he complied. He also said he hasn’t seen the memo purportedly written by Malami against Magu