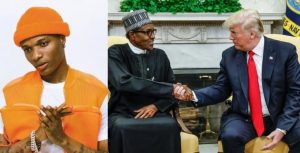 Starboy Wizkid has criticised President Muhammadu Buhari in wake of the recent killings in the country.

Taking to his Twitter page, the “Joro” crooner likened the Nigerian president to the president of the United States, Donald Trump.

According to the multiple award-winning singer, both presidents are clueless and the only difference between them is that one is addicted to Twitter.

“Buhari/Trump same person lol only difference be say one sabi use twitter pass the other. Clueless!”

“God save the world ! Save the people.”

This is not the first time the entertainer is taking a swipe at the Nigerian president.

In a tweet, the singer swung a jest at President Muhammadu Buhari after he returned from a trip to the United Kingdom.

Responding to a tweet that President Buhari is back in Abuja from a private trip to the United Kingdom, Wizkid wrote:

Buhari/Trump same person lol only difference be say one sabi use twitter pass the other. Clueless!

39.4K people are talking about this