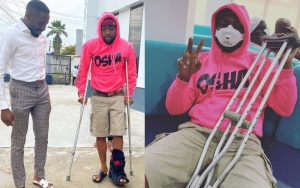 Popular singer, Davido has been temporarily confined to crutches after he sustained a leg injury.

For the father of three, the month of June started off on the wrong foot (Pun not intended) and his fans are praying for a speedy recovery.

His lawyer, Bobo F. Ajudua shared these photos of him as he stepped out in crutches yesterday, June 1st. He wrote;

“How some people chose to enter June. Nawa. At some point yesterday we were literally thanking God there are no shows right now ?. Get well soon bro @davidoofficial ????”