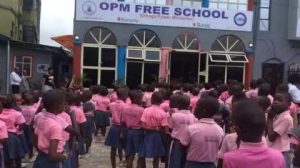 The Federal Government, FG’s attention has been drawn to the rumours going around the country that schools will be resuming on 1st, 8th, or 20th June. We would like to inform you that the Federal Government(FG) is yet to officially announce any resumption date.

Minister Of State For Education in the person of Chukwuemeka Nwajiuba has repeatedly said that schools will resume but not in two weeks’ time.

He further revealed that the chairman of the Presidential Task Force on Covid19, had said that it is a national response and then every other thing we do flows from that.

“I can’t confirm what your children are saying that schools will be reopened in two weeks. We are all interested to reopen schools and I hope we will resume soon but not in two weeks.

“The West African Examination Council (WAEC), Ministers Of Education and The African Union(AU) is concerned as you are. We hope to reopen soon”, he added.

Chukwuemeka Nwajiuba went further to disclose that The Ministry Of Science And Technology are working together to put a system that can disinfect every child in their going out and coming in.

Nwajiuba further assured that schools are working hard to ensure that the children will go safe and come out safe.

1. The first rumor was that schools will reopen May ending/June.

2. The second rumor was that schools will reopen on June 8th or 20th.

3. While the third rumor was that school will reopen on 1st June.

All this news are rumours because the FG has not officially announced the resumption date, but assured that they are working hard to ensure that children are safe from this Coronavirus global pandemic.