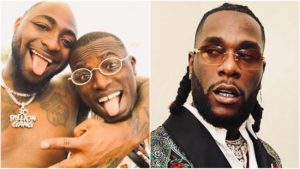 On May 29, 2020, DMW and Davido affiliate, Aloma took too his Instagram page to fire shots at self-acclaimed African Giant, Burna Boy.

In the video which has now gone viral on Twitter, Aloma says that Burna Boy is biting the hands that feed him. He also alleges that Davido put his own performance on the line at a One Africa Music Fest where Burna Boy was being denied access. He also implies that Davido is the one preventing him from moving on Burna Boy.

In another video, Aloma can he heard saying that he will come for Burna Boy.

You might remember that a few days ago, Burna Boy and Davido appeared to have a squabble on social media after Davido posted a picture of himself and Wizkid on Twitter. Sources close to the growing beef allege that the issue has been on since Burna Boy released his album, African Giant in 2019 and peaked after Burna Boy lost the Best World Music Album category to Angelique Kidjo.

You can watch Aloma threatening Burna Boy in the following videos;

! Baba Dey parah for Burnaboy ! Live come out finish on the gram

I hope y’all know aloma ain’t joking with 30bg . If you fuck with the hand that feed him

HEMA COME FOR YOU

60 people are talking about this