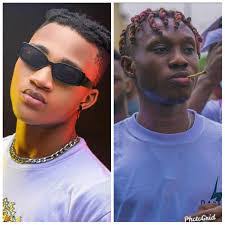 9jajoy.com Presents Picazo ft. Zlatan – If I for downloads

Picazo, Former YBNL rapper releases his latest hits which he titled “If I“.

“If I” features the Zanku Boss “ZLATAN”

Add Juls ft. Jah Cure – Wishes to Your Playlist below:

Picazo Rhap was born in 1997 and is presently 21 years old. His real name is Omogblahan Sodiq Ilabode (meaning Omogblahan ‘Appointment’; Sodiq ‘Faithful’; Ilabode ‘Mixed’) but he is popularly know by his stage name Picazo Rhap. He was born and bred in Lagos State, Nigeria, his state of origin.
Picazo Rhap rose into fame after releasing a cover of Chinko Ekun’s hit song, ‘Able God‘ and shortly after that, Olamide followed him on Instagram. Like other YBNL artists, Picazo Rhap raps in Yoruba his native language.
On July 8th 2019, just few months after Lyta‘s exit from YBNL, Picazo Rhap also announced his exit from the label.
He made the announcement via his official Twitter handle where he also appreciated the label boss, Olamide’s support within his period with the label.
Picazo Rhap had his primary and secondary school education in Lagos and then proceeded to the Lagos State University.

Picazo Rhap is a rapper, singer, song writer and recording artist who rose into fame after releasing a series of covers. He was first noticed by the DMW boss Davido after he dropped a cover of his hit song, Aza and then Olamide.
HOT  Davido Ft. Tiwa Savage – ABT

According to media sources, he started singing at a very early age and has released a good number of covers which are available in his Instagram handle. He is a very talented rapper who prefers to rap in his native language, Yoruba.

HOT  Nikita ft. Zlatan – Body
More updates will be coming soon. Corrections to this bio should be sent to [email protected]