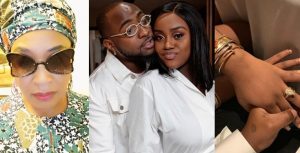 Controversial journalist, Kemi Olunloyo has claimed that Chioma‘s engagement ring to award winning singer, Davido has been taken away from her.

In a recent tweet, the popular journalist insinuated that Davido collected back the engagement ring which he gave her some months back.

Taking to Twitter, Kemi asked her fans whether any of them was aware of the reason why Chioma Rowland‘s engagement ring was taken back.

“#BREAKING EXCLUSIVE. Does anyone know why Chioma Rowland’s engagement ring to singer Davido taken from her?#Kemitalks”.

While most of her fans were curious to know the reason behind her claims, others bashed her for always pocknosing into Davido’s affairs.