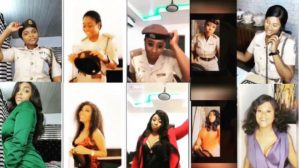 The 5 female officers of the Nigeria Immigration Service, NIS who took part in the popular Bop Daddy Challenge on social media, have been reportedly punished with ‘severe posting’ by the agency.

The personnel, according to NewswireNGR were reposted from their current places of assignment in Abuja, Lagos and Enugu and given “graveyard” assignments as far afield as Borno, Kano and Yobe.

The videos of the ladies had appeared on social media on different dates in April, but they were summoned by the agency on April 20th for partaking in the challenge.

According to a statement by Iam Haliru, Assistant Comptroller General of the NIS, the viral video clip tagged #BopDaddyChallenge, has caused the organisation a lot of embarrassment.

A leaked Memo however has revealed that the five officers have been handed punitive and discriminatory postings.