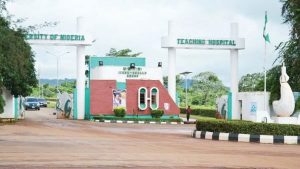 A middle-aged man from Enugu State, Mr Nwachukwu Alagbu, has accused medical doctors at the University of Nigeria Teaching Hospital (UNTH), Enugu of professional negligence leading to the death of his wife, Mrs Nkiru Alagbu.

The heartbroken Alagbu who wailed uncontrollably said his wife had suffered heart problem since she gave birth to her fourth child over a year ago.

According to him, the doctors on duty allowed his wife, who was suffering from a cardiovascular disorder to die in a car that brought her to the hospital for fear that she might have contracted COVID-19.

He said his wife, 35, developed cardiovascular disorder shortly after she gave birth to her last child more than a year ago and on April 14, she was referred to the tertiary health centre by a consultant at a clinic she was attending.

“It became a problem to get attention. One of the doctors standing from a distance just asked some questions and concluded that it was a COVID-19 case,” he said.

He wondered how the UNTH doctor declared her a coronavirus patient without attending to her.

He said all entreaties by him, his sister-in-law, a family friend, who accompanied them to the hospital, and a fellow doctor from another hospital for the medical personnel to change their minds fell on deaf ears until his wife died in the car that brought her to the hospital.

“They allowed my wife to die unattended to, all in the name of fear of COVID-19. Medical doctors watched my wife die like a soulless being.

I thought it was a local movie playing when I could not get help from the Government Hospital, simply because the doctors felt my wife had COVID-19 symptom,”.

He said When contacted, the chairman, medical advisory committee of the hospital said he was in a meeting and will get back to our reporter but never did even after several calls and text messages sent to him.

The Public Relations Officer of UNTH, Cyril Keleze, however, declined comment but added that the management would issue a statement. As of the time of filing this report, he was yet to issue the statement.