Right Or Wrong? Pastor Adeboye Orders His Son To Sack Female Secretary For Being Sexy | Naijajoy 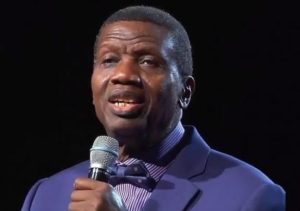 Nigeria’s number 1 most respected pastor and Daddy G.O of Redeem Church, Pastor Adeboye has made a controversial statement.
Pastor Adeboye took to Twitter to share what he told his son to do as regards a female secretary that is always making him feel happy going to office.

It appears the Pastor’s son is crushing on his secretary or admires her without any string attached but Pastor Adeboye ordered him to Crush The Crush.

According to Pastor Adeboye, he ordered his son to sack the female secretary immediately on the ground that “no one is worth his marriage“.

Meanwhile, Nigerians on Twitter have attacked the reputable man of God for making an innocent lady loose her job, just because his son is having feelings towards her.

Many people criticized the approach of the man of God towards the issue.
See What Nigerians Are Saying Below:- 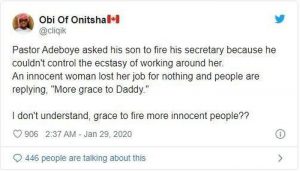