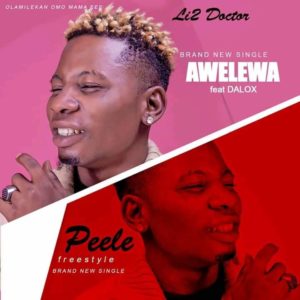 The love song titled ‘Awelewa’ produced by Dalox Beat, is a bonus for his fans who have been supporting his musical career he hits lime light.

“Awelewa is a love song. It illustrates how a man loves his wife and telling her not to listen to deceivers who wants to snatch her from him. It is a very interesting song that delivers creative character”, Olamilekan said.

Aside Awelewa, second Track Titled ‘Peele’ is a Freestyle Dedicated to his Die Hard Fanz both Away & Nigeria.

We can even put ‘Peele’ as a Latest Slogan founded by Him cause he done a good Lyrics through this Jam.
DOWNLOAD: Li2 Doctor – Pele Freestyle