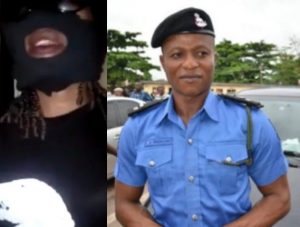 The Lagos State Police Command on Thursday debunked allegation raised by a masked lady in a video on social media accusing a police inspector, Marcel Nnabugwu of living in opulence and above his means.
The lady in the said video which went viral on the internet, alleged that Nnabugwu owns a property at No. 27, Remi Fani-Kayode Street, GRA, Ikeja worth N250million, as well as an exotic car with a customized license plate number titled “MCON”.
The lady further alleged in the video that the moment the officer in question enters into any night club, the club shuts down to all customers to attend to his needs.
She also alleged that the officer is worth over N2billion, claiming that he spent millions of Naira during his 30th Birthday party recently, and thereafter requested the police authorities to investigate the source of wealth of the officer whom she further alleged to be serving in Mopol 18 Owerri.
The attention of the police high command was therefore drawn to the video clip making the rounds on the internet in which a lady hooded to mask her identity, made serious allegations against a police sergeant and as a responsible and accountable institution, the Inspector General of Police ordered investigation, following which the Command swung into action, and the outcome revealed that there was no iota of truth in the claims by the masked lady.
Investigation conducted by the police to check the veracity of the allegations revealed that there indeed exist one Christopher Marcel Nnabugwu, alias MCON in the police, and that the said officer was enlisted into the Police Force in the year 2000 and was trained at the Police College Oji River, Enugu State.
Further investigation revealed that the said Nnabugwu is presently an Inspector of Police serving at Ogudu Police Division where he is attached to Divisional Crime Branch (DCB) and not a police sergeant serving at Mopol 18 Owerri as alleged.
That Inspector Marcel Nnabugwu has never served in PMF (Police Mobile Force) since his enlistment into the Nigeria Police.
That his picture in Police Mobile Uniform down loaded by the masked woman from his wall on the Facebook as attested by the alleger, was the uniform he wore when he went for Mobilization exercise into the PMF for which he was unsuccessful. According to the Inspector, his love of the PMF Uniform made him to wear it and take photograph to remember the day he went for the exercise even though he failed.
Investigation also revealed that he does not own a car nor landed property in any part of Nigeria or anywhere else in the world. The Inspector is a proud tenant at No. 125 Old Ota Road, Oke-Odo Agege Lagos where he occupies a room and parlor.
It was also discovered that Inspector Christopher Marcel Nabugwu is currently single owing to his financial status as he is still gathering resources for that purpose. It was shown in the video where he was singing and dancing. Well, that’s his hobby so says the Inspector.
To further put a lie to the claim that the officer was worth N2billion, the officer’s bank accounts number with corresponding balance as at June 20, 2018 revealed as thus: – FCMB (2288247017) balance of N15,000.00 and
ACCESS (0041131987) balance of N5000.00
From all intent and purposes, the lady in the mask was out to cause mischief. Her evil machination was not only targeted at the poor, innocent officer but an attempt to malign and dent the image of the Nigeria Police and bring the entire organization into public opprobrium.
The Commissioner of Police said the development brought the need for people not to believe whatever they see on the social media hook, line and sinker.
The CP added, “we are on her heels. As a matter of fact, we are closing in on her. It’s a question of time.”
CSP CHIKE OTI
POLICE PUBLIC RELATIONS OFFICER
LAGOS STATE POLICE COMMAND
JUNE 21, 2018