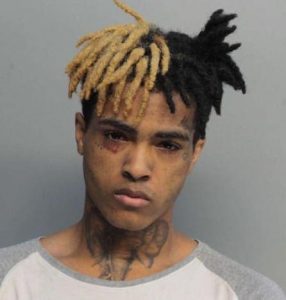 Popular rapper Xxxtentacion (born Jahseh Dwayne Onfroy) has been killed. He was shot and killed today June 18th in his sports car in Miami. According to police, the 20 year old was ambushed by two men in a Black SUV, while he was leaving a motorcyle dealership. The men pulled out guns and shot him dead. Another story is that he was leaving the dealership when a ‘gunman driving a black Dodge Journey ran up to his vehicle and shot him.’ Multiple gun shots were heard. Emergency dispatch radio described two black males wearing hoodies, and the shooter was wearing a red mask in the incident which they have classified as a drive-by shooting.The car used in the shooting has been confirmed as a black Dodge Journey, with dark tint and black wheels.Witnesses at the scene also told cops that a Louis Vuitton bag was taken from XXX’s vehicleXXXTentacion who was a promising talent was awaiting trial for domestic violence against his pregnant girlfriend. He was also facing more than a dozen felony charges and has been on house arrest until recently after the judge let him out so he could tour. Xxxtentacion was filmed lying motionless behind the wheel of his car. He was later rushed to a local hospital, where he was pronounced dead. See the TMZ video below… The post Popular rapper XXXtentacion, 20, shot dead in Miami (video) appeared first on Linda Ikeji Blog.
Source: New Updates