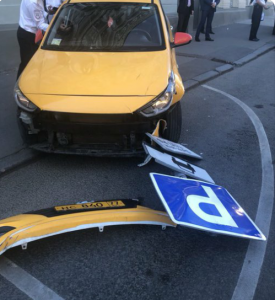 A taxi ploughed into a crowd made up of World Cup fans in Central Moscow, leaving eight of them injured.
According to Russian media, the crowd was made up of Mexican fans waiting to watch their team play Germany tomorrow. They were standing on a pavement near Red Square, when the taxi crashed into their midst. The incident happened on Ilinka Street, about 650ft from the Red Square and Moscow’s famous GUM shopping arcade.